I will warn you in advance, I am currently listening to ‘I’m Yours’ by Jason Mraz whilst typing this, and as such, I may end up typing a line or two – depending on when my fingers decide to follow in line with my mouth (come on, we’ve all have gone through it!).

So the Marriage Mart. There comes a time in the life of practically all South Asian families, when the parents turn around to their daughters and say, “You need to get married. You’re getting too old.” Maybe not in all families, but definitely in the Bengali community. If being 25 was old, imagine being in the same position 3 years later.

I was one of the lucky ones, NOT growing up in an area that consisted of a large Bengali community. Yes, I’m smiling about it. Although there are many things I do value and proud of, there are just as many things that I am not. I guess that’s within all cultures.

Anyways, not until I was pushed into signing up to these matrimony sites, or having parents play match-maker, have I been exposed to the true extent of my culture. My main points are: Many Bengali people are still backwards, that many still hold a narrow-minded view of how their perfect ‘daughter-in-law’ should be, and the guys looking to get married really need to grow up (matrimony sites). Age is, I must agree on this occasion, just a number – you’re an adult, then think like an adult.

Moving on to my first point, and I’m sure there are many sisters out there who would agree with me, the ‘backwardness’ of some Bengali families. Actually, I think we could merge it with the point on narrow-mindedness. So how is a perfect ‘daughter-in-law’ supposed to be, or rather, the qualities of the dream ‘daughter-in-law’?

I’m not entirely sure. Maybe….she has to be tall, hmm 5ft too short? (Yes in most cases). Listen to in-laws, ok that makes sense, who wouldn’t? Of course she has to be pretty. I don’t know, fair skinned most prob? Ask the guy. No no, it’s the PARENTS. Looks has A LOT to do with it.

So my biggest issue with these Bengali families are that, (ok many would hate me for this), they can go and preach religiously, but then say no to a potential bride if she has a medical problem.

I have epilepsy (BIG SMILES), I’m 1 in every 103 people in the UK that have this condition. Not an illness, it’s a condition. With this in mind, let’s continue on with the Marriage Mart… 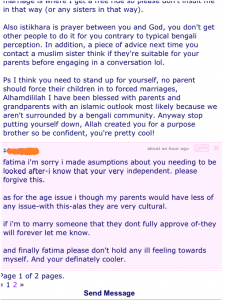 So I have come across many guys so far, who appear to be serious about marriage and state clearly that they have no issue with my condition, yet after talking to their parents about it, pass on a firm no, rejection etc. See what I mean when I state ‘backwards’? I guess it’s also, practice what you preach. I mean, you can be all high and mighty about ‘religion’ but then choose to follow only a section of it. No no, it’s ‘you can state the woman has to be practising, religious etc etc etc, yet reject her based on something she cannot control.

As you can see, the screen shot on the left was from a matrimony site. Well, this person decided to converse with me, stating that his parents would be happy with whoever he chooses, they aren’t the ‘typical’ type. But once he told his family about my condition, it was the usual rejection. Lovely right? Ok, it’s not the rejection that got me annoyed, it was what his final few response stated – As I have this condition, apparently I require someone to look after me at all times, which they cannot provide. He also included the sort of jobs I should be doing, tutoring will not bring in enough money, I should become a primary school teacher as History Secondary is too competitive. Like a normal person, I responded, sarcasm with anger, but ended it nicely – it is an insult to state a woman who has gone through life, completed her degrees, worked throughout, that she needs looking after! I honestly thought he was a good match. You can see clearly that ‘culture’ has decided to take precedence over ‘religion’. So, these matrimony sites are just great right?

Everyone has their own criteria, I have no problem with that. My annoyance is, why continue talking to someone and make them believe that the condition is no problem for them, whilst not considering what their parents will think (check above event). It’s awkward enough talking to some random stranger all about your life, but to do it repeatedly requires A LOT of patience. I really think a person should state it on their profile if they’re going to have problems with issues such as these. I mean, sure everyone wants to look good in order to attract a prospective bride or groom, but honesty is important right? Or am I just being naive (which many state by the way, along with innocent etc)? 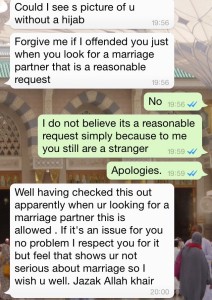 Can’t think of a caption

And then you realise that there are some out there who have nothing better to do with life than to make pointless convos and then say no. For example, I had one guy stating that he required me to reveal my hair after one conversation and that only being an on and off conversation, whereby he didn’t provide me with an image. Should these people be allowed on these matrimony sites? Well, um, you can judge whether I was harsh or not with my response. As you’ll be able to infer from the convo, it was the last sentence that got me slightly angry, as I have been and still am totally AGAINST these sites, took 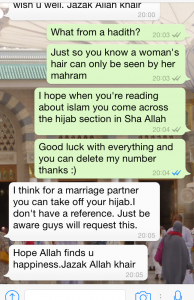 Sister replied back as usual!

a lot of pushing from my mum for me to finally sign up. Ah the frustration, then anger, then silent treatment, then the final acceptance. It’s time consuming too.

I’ve kind have lost touch with the whole point of the blog I think. Suffice to say, people need to be more honest on their profile. When they begin typing they should be thinking what their parents look for rather than what they are looking for in their ‘wife’. The harsh realities of a typical Bengali family. One final experience – a nice brother stated (like others) that he had no issues, and it could have happened to him of what if something happened AFTER marriage, then what. But like all others, after conversing with his parents, I received a firm rejection.

Also please, please do NOT write ‘looking for a religious or practising woman’ when you know your parents will say no as soon as they learn that the lady in question has a medical condition. Imagine how that makes us feel. Again, Big smiles :). 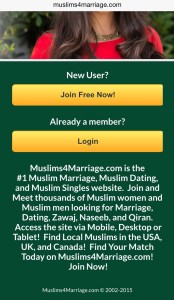 Some people have found success, so I can’t criticise it too much, just my take on it from my experience.

Oh and my little brother (when I say little, I mean younger – the kid’s a whole foot taller than me) came across another matrimony site, which sort of contradicts with the religion itself. The front page says it all!

People please don’t attack me on the above comment! Just curious. I mean it probably is the #1 Muslim Marriage, Muslim DATING website, I wouldn’t know, nor would I want to know 🙂

I really have had enough of this ‘marriage mart’. I do quite enjoy reading a Regency Romance book and imagining whether such a person can exist in the real world. Marriage of convenience or marriage through love and romance (within the boundaries of course).

I started typing this blog post (on and off) 2 months ago, but I’m posting it up today at 2:14/15/16AM – but I’ve had to make edits. I mean certainly there are those who disagree with me, but I’ll reiterate, it’s my experience.

As you can probably tell by now, I am indeed a Muslim, but this goes out to everyone 🙂

Sisters just remember this quote, or even brothers too, that our beloved Prophet

“The people who were not tested in this Dunya will wish their skins were cut up when they see the rewards for those who were tested.”

I would love it if those out there could inbox me their experience. Imagine posting up a blog on their experience? Brothers and sisters – you know, to make it neutral and diplomatic: fatima@fatimabegumwriter.com