Let me Enlighten you with Enlightenment – Consequences

“Where there is no law, there is no freedom…for liberty is, to be free from restrain and violence from others; which cannot be, where there is no law: but freedom is not, as we are told, a liberty for every man to do what he lists (for who could be free, when every other man’s humour might domineer over him?)”

Above quote by John Locke, from the “Second Treatise of Government”. He is just one amazing intellectual right?!

I know that blogging about my insignificant life is not extremely interesting, but hopefully my knowledge and opinions in the field I specialise in, History and Politics, will compensate for that.

I, myself, have learnt quite a bit about this Era, which to me is extremely pleasing. However, I will only be dealing with some of the consequences.

Before the Christmas hols, I was told that the girls do not receive homework for History as its not a GCSE, therefore, yes you guessed it, I wasn’t allowed to set them anything to read over.

I had spent my time researching what Hobbes and Locke had to say about Man and Government. I had spent time typing everything up in simple words so that they could understand. I even came in early to just finish off the remaining bit about Locke. But come lesson, “They aren’t given homework.”

Ok so I’m thinking…”What?! Why could you not tell me before? I wouldn’t have wasted my time researching and preparing homework for them!” Anyways that was what I was thinking. But like a coward, I didn’t mention it! Just a simple “ok.”

I would go into detail concerning what actually happened, but today I’m concentrating on the Consequences (again, apologies for the delay).

In my previous blog, I mentioned the American Declaration of Independence 1776 and the Bill of Rights 1791. I also mentioned the French Declaration of the Rights of Man 1789. I want to compare this to the English Bill of Rights 1688 and I want to demonstrate how the Enlightenment Era affected and pushed for the American Revolution and the French Revolution. We can also easily link today’s society with the Enlightenment Era, especially since many of the views put forward by Enlightened Thinkers has harnessed today’s Politics and thinking. That I leave to you.

I don’t plan to go into detail about the French Revolution and American Revolution; that is simply another topic, or topics, altogether.

There are ALOT of similarities between the English Bill of Rights 1688 and the American Declaration of Independence 1776 and Bill of Rights 1791 and the French Declaration of Man 1789. This, in part, can be argued to be as a result of Enlightenment. Intellectuals, such as Locke and Rousseau, had an impact. Of course there are many more.

So I’ve decided that first demonstrate the similarities and then compare it to the arguments put forward by some intellectuals (Locke’s Second Treatise of Government and Hobbes’s Leviathan).

I’m going to go with Hobbes’s definition of the Commonwealth:

Before I begin, I just want to remind all that John Locke was influenced by the Glorious Revolution whilst Hobbes was by the English Civil War. If we consider Hobbes, he was right in one sense, with his opinion that society needed a monarchy – that was the only way society could function perfectly. Indeed, he compares Monarchy, Democracy and Aristocracy in his book. The outcome is that there are flaws in the latter two. Why does it make sense? Well consider the Restoration. Although the Monarchy was overthrown in Britain after the English Civil War, it was restored again after the death of Oliver Cromwell (who wanted his son to rule after his death). This is known as the Restoration period, beginning in 1660, reign of Charles II. Britain could not survive as a Republic as conflicts began to take place between the Three Kingdoms (Scotland, Ireland and England) because remember Charles I was considered the King of the Three Kingdoms. 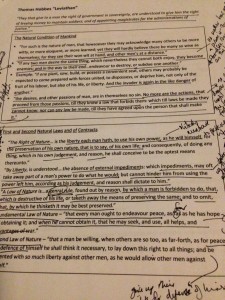 I know I am going off the point…too much History there. But it is important as it demonstrates the importance of a monarchy, in some countries that is.

Locke was influenced by the Glorious Revolution – bloodless revolution, in England that is. However, this revolution did not result in Britain becoming a Republic once again, rather a replacement of the present monarchy (at the time). It resulted in considerable limitation of power that could be exercised by the Monarch – William III. We just need to look at the Bill of Rights to see the change. So why is this important? Well Locke’s theories were based around this. Limitation of political influence by any established religion, freedom of speech and debate, freedom of election – will mention this in more depth hopefully. And his writings influenced the Founding Fathers, such as Thomas Jefferson, who drafted the Declaration of Independence.

So I would like to go into British and American History, but maybe not today, especially since the length of today’s blog in pretty long!!

To keep it very short…

“That excessive bail ought not to be required, nore excessive fines imposed, nor cruel and unusual punishment inflicted.”

“Excessive bail shall not be required, nor excessive fines imposed, now cruel and unusual punishments inflicted.”

The above is just one similarity. 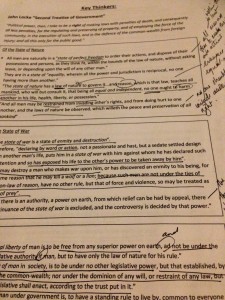 Now Locke argued that the people should decide who to govern them and that they are there to protect their rights, similar to what the Bill of Rights, above states. If we compare it to the American Declaration of Independence, it simply states “That to secure these rights, Governments are instituted among Men, deriving their just powers from the consent of the governed.” This is called Democracy. Therefore, one consequence of Enlightenment is that it played a role is the drafting of the American Declaration of Independence, and on how Democracy functions.

There are of course many more, and the easiest way to find this out is by just reading through the various Bills stated above and compare it to the arguments put forward by the Enlighten Intellectuals.

I want to mention two more consequences as I feel that this article is becoming a bit too long.

“If any two men desire the same thing, which nevertheless they cannot both enjoy, they become enemies; and in the way to their end…endeavour to destroy, or subdue one another.”

If we compare it to today’s society, it applies well when we look at Realism. Therefore, War. I want to keep on the topic of War.

Hobbes also pointed out that when there is war:

“The notion of right and wrong, justice and injustice have no place. Where there is no common power, there is no law; where no law, no injustice. Force and fraud, are in war the two cardinal virtues.”

And that “the passion that incline men to peace, are fear of death; desire of such things as are necessary commodious living; and a hope by their industry to obtain them. And reason suggesteth convenient articles of peace, upon which men may be drawn to agreement.”

These quotes are simple enough to grasp. This is the consequence of war. One example: the 1948 Arab-Israeli War. This resulted in massacres committed by the Israelis, and displacing Palestinians from their homes. I will support the Palestinians in this instance as this was their land, their home and the United Nations had no right to divide the country up (another topic altogether which I will probably discuss later). Certainly there are many more.

John Locke also talks about the topic of War:

“one may destroy a man who makes war upon him, or has discovered an enmity to his being, for the same reason that he may kill a wolf or a lion; because such men are not under the ties of common-law of reason, have no other rule, but that of force and violence, so may be treated as beasts of prey.”

Therefore, agreeing with Hobbes’s theory of war. There are no laws when it comes to war. This is evident in today’s society, although we can point out that individuals can now be prosecuted for war crimes. However, that being said, George W Bush and Tony Blair have yet to be prosecuted, unless we say it’s an invasion, though I don’t see much of a difference.

We know, when it comes to war, there are no rules, it’s about who survives, and as Locke points out that when war is declared, it “puts him in a state of war with him against whom he has declared such an intention and so has exposed his life to the other’s power to be taken away by him.” 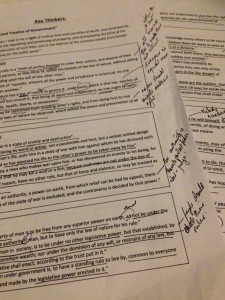 Yes, I annotate all my work, helps me identify any errors.

Of course, the lesson contained much more than those mentioned above, and interactive. The last part, focussing on Locke and Hobbes, that was just a taster of the final lesson – 2 pages of a list of quotes each by Hobbes and Locke, covering various topics, to be linked to today’s society! Then a class debate! Pictures below!

I would go on and on, but I think I will have to stop it there, apologies, I know I haven’t mentioned as much as I would have liked. Barely anything! But I would say that you just need to read through the works of the Intellectuals and compare it to how society functions. Also, you need to have that passion in you and interest in the topic – history and politics!!

Typed but not checked!

Spread the love
Let me Enlighten you with Enlightenment (Part 2) PGCE, Institute of Education, Interview!